US, Israel aim to divide and conquer Middle East 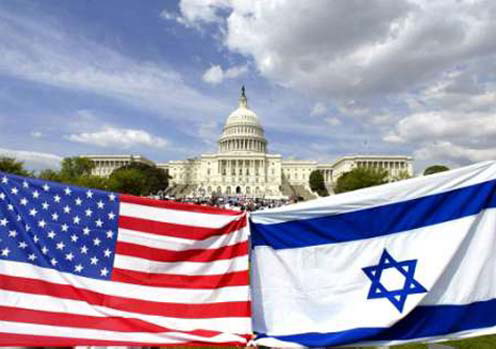 In a recent broadcast, MSNBC’s Chris Hayes denounced the sordid attempts of 16 leading Democratic lawmakers who, under the influence of the Israeli lobby, are pushing to impose new economic sanctions on Iran, which is designed to sabotage Obama’s rapprochement with the Islamic Republic.

Although this condemnation of the Zionist lobby’s implacable warmongering is admirable, in the strictly confined discourse we see on the mainstream media presenters of this caliber refuse to state the obvious, which is that the United States has no right whatsoever to tell any country what to do on any matter, either foreign or domestic. Economic sanctions are an act of war, yet the US has imposed crippling economic sanctions on dozens of countries around the world, strangling the life out of them like a deadly python suffocating its victims.

The US has utilized sanctions to neuter nations that are not compliant with Washington’s hegemonic agenda. In turn, Washington is driven by Israel’s imperial desire to subjugate its foes, keeping them weak and divided. Using America as its proxy, Israel aims to fragment and destabilize the Arab/Muslim world.

In 1980 the US backed Saddam Hussein’s invasion of Iran. They provided him with material and diplomatic support. They gave him weapons and intelligence assistance. When it became apparent that Iran was going to win that war, the US dispatched a war ship off the coast of Iran called the USS Vincennes. On July 3, 1988, the Vincennes deliberately shot down an Iranian civilian airplane, killing all 290 passengers, including 66 children. This act of state-sponsored terrorism was a “message” from Washington designed to intimidate the Iranians into entering peace talks with a nearly defeated Saddam, instead of seeing the war out to the bitter end. The US has never apologized for this act of barbarism.

The Iran-Iraq war was part and parcel of the US-Israeli divide and conquer strategy in the Middle East. In 1982 an Israeli geo-political thinker named Oded Yinon penned a report entitled “A Strategy for Israel in the Nineteen Eighties.”  In the document Yinon outlined a diabolical scheme whereby Israel would neutralize its adversaries by instigating internal ethnic and religious conflicts in the Arab/Muslim world. Yinon called for the dissolution of the Arab states surrounding Israel. He envisioned the break up of countries like Iran, Iraq, Syria, Lebanon and Jordan into smaller, weaker statelets, thereby undermining their ability to resist Israeli domination.

“In the short run it is Iraqi power which constitutes the greatest threat to Israel. An Iraqi-Iranian war will tear Iraq apart and cause its downfall at home even before it is able to organize a struggle on a wide front against us,” Yinon wrote. “Every kind of inter-Arab confrontation,” he continued, “will assist us in the short run and will shorten the way to the more important aim of breaking up Iraq into denominations as in Syria and in Lebanon.”

Skipping ahead to 1991, Iraq entered into another conflict, this time with Kuwait. The US gave Saddam Hussein the green light to invade Kuwait, and then stabbed its ally in the back. America’s entry into that conflict was predicated on a monstrous lie. Tom Lantos, a Jewish-American congressman from California, spearheaded the effort to galvanize public opinion behind an American intervention in the Iraqi-Kuwaiti territorial dispute. He set up a “human rights” front group called the “Congressional Human Rights Foundation.” Working in cahoots with the public relations firm Hill & Knowlton, Lantos put on a televised hearing where several people claiming to be “witnesses” to Iraqi atrocities in Kuwait gave testimony.

The star witness was a 15-year-old Kuwaiti girl who appeared at the hearing under the assumed name “Nayirah.” She gave a tearful testimony about how she saw Iraqi troops enter a hospital in Kuwait City, whereupon they removed hundreds of babies from their incubators, leaving them to die on the cold floor. “While I was there, I saw the Iraqi soldiers come into the hospital with guns, and go into the room where . . . babies were in incubators. They took the babies out of the incubators, took the incubators, and left the children to die on the cold floor,” she said.

The story spread like wildfire across the mass media and President George H. W. Bush trumpeted it from the Oval Office pulpit. Soon after the atrocity story reached critical mass, the US deployed warplanes and ground troops to “punish” Saddam. American forces killed tens of thousands of Iraqis in the war.

Some time after that war, the incubator babies atrocity story was exposed as an out-and-out hoax. “Nayirah” and her compatriots posing as downtrodden victims of Iraqi aggression were all actors reading from a script prepared for them by the public relations firm Hill & Knowlton. Nayirah was the daughter of Kuwait’s ambassador to the US, Saud Nasir al-Sabah, and she had lived in the US most of her life. She was never even in Kuwait when Saddam invaded.

Tom Lantos’ propaganda production helped push America into a war for Israel’s interests. The second US war against Iraq in 2003, which was also based upon malicious lies about Saddam’s non-existent “weapons of mass destruction,” was similarly engineered by Zionists to facilitate the removal of the Iraqi “threat” to Israeli power. “Why would Iraq attack America or use nuclear weapons against us? I’ll tell you what I think the real threat (is) and actually has been since 1990 — it’s the threat against Israel,” said Philip Zelikow, a former Bush administration insider.

In 1996 several leading neoconservatives wrote a strategy paper for Benjamin Netanyahu’s Likud regime entitled “A Clean Break: A New Strategy for Securing the Realm.”  In the report they talked about “rolling back Syria” and argued that deposing Saddam Hussein in Iraq was “an important Israeli strategic objective.” Among the authors of the dastardly document were the Israel-first partisans Richard Perle, Douglas Feith and David Wurmser, all of whom became high-ranking members of the Bush administration in 2003, leading the drive for a war against Iraq.

Shortly before the 2003 invasion, the Israel-first champion Tom Lantos assured his Israeli counterparts that Saddam Hussein would soon be ousted and an US/Israeli-backed puppet dictator would be installed in his place. “You won’t have any problem with Saddam,” the Jewish congressman told MK Colette Avital of Israel’s Labour Party. “We’ll be rid of the bastard soon enough. And in his place we’ll install a pro-Western dictator, who will be good for us and for you.”

In 1996 Madeline Albright, the former secretary of state under Bill Clinton, unveiled her utter inhumanity on a CBS News 60 Minutes broadcast. When informed that the genocidal US economic sanctions imposed on Iraq after the 1991 [Persian] Gulf War caused the deaths of 500,000 Iraqi children, Albright remarked that it was “worth the price.”  In that twelve-year period from 1991 to 2003 more than a million Iraqi children as well as hundreds of thousands of Iraqi men and women died as a result of US sanctions.

Alongside Israel’s political leaders, Israeli religious leaders were jubilant at the prospect of Iraq’s demise. Yona Metzger, Israel’s chief Ashkenazi rabbi, thanked President Bush for invading Iraq and killing millions of Iraqis. “I want to thank you for your support of Israel and in particular for waging a war against Iraq,” the rabbi told President Bush in a brief verbal exchange at Ben-Gurion airport.

Believing their war of annihilation against the Arab/Muslim world is sanctioned by god, the Jewish-Zionist elite of Israel and the United States will stop at nothing to bring doom upon millions of innocent people who stand in the way of their grandiose dream of a “Greater Israel.” In 1962 Israel’s first Prime Minister David Ben-Gurion made a striking prediction. He candidly outlined his vision of the future, forecasting that the nations of the world would become “united in a world alliance, at whose disposal will be an international police force. All armies will be abolished, and there will be no more wars.”

In his eerie presage Ben-Gurion referenced the Jewish prophet Isaiah. The book of Isaiah in the Old Testament of the Bible contains some interesting passages that illuminate the supremacist mindset of Ben-Gurion and his co-religionists. Isaiah 60:5 says, “Ye shalt also suck the milk of the Gentiles, and shalt suck the breast of kings.” Isaiah 61:5 speaks of how “Strangers will shepherd your flocks; foreigners will work your fields and vineyards.” Isaiah 60:5 explains how “The wealth on the seas will be brought to you, to you the riches of the nations will come.” “And you will be called priests of the LORD, you will be named ministers of our God. You will feed on the wealth of nations, and in their riches you will boast,” it says in Isaiah 61:6.

Isaiah 60:12 decrees the destruction of nations not subservient to the chosen people: “For the nation or kingdom that will not serve you will perish; it will be utterly ruined.” Isaiah 49:23 foresees kings and queens becoming slaves of the chosenites: “Kings will be your foster fathers, and their queens your nursing mothers. They will bow down before you with their faces to the ground; they will lick the dust at your feet.”

“For thou art an holy people unto the LORD thy God: the LORD thy God hath chosen thee to be a special people unto himself, above all people that are upon the face of the earth,” it says in the book of Deuteronomy (7:6). Driven by religious fanaticism and ethnic chauvinism, the Jewish Zionists and their puppets are pursuing mad policies that will only cause bloodshed and misery.

It is now up to people with a conscience, however many there are left in the world, to recognize this evil for what it is and confront it with the truth.