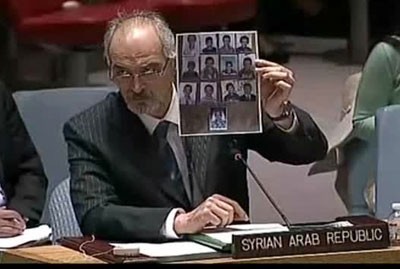 New York, (SANA) Syria’s Permanent Representative to the UN Bashar al-Jaafari said some countries have become addicted to shedding the Syrians’ blood over the past three years.

Delivering Syria’s statement in a UN Security Council session on the item of “The Situation in the Middle East” on Tuesday, al-Jaafari added that those same countries continue to talk at great length in their statements about Syria in a misleading and provocative way that serves only the terrorism-backing project in the region.

While dismissing those countries’ representatives’ attempts at diverting attention from the core of the aforementioned item, which is meant to deal with means to end the Israeli occupation of the Arab lands, al-Jaafari regretted that all of the speakers failed to mention the terrorist acts which hit Syria earlier on the day and claimed the lives of 40 civilians in Homs and 14 children in Damascus.

He inveighed against Saudi Arabia, Qatar, Turkey and some UNSC member states who called for two meetings on Syria at the UN General Assembly last month that coincided with a UNSC meeting to listen to the update of the General Assembly on ‘The Situation in the Middle East’ and a meeting of the UN Committee on the Exercise of the Inalienable Rights of the Palestinian People.

“These countries sought to distract from the Palestinian Cause…and fish in the troubled waters with regard to the situation in Syria,” he said.

He also slammed those countries for remaining silent on human rights and international humanitarian law violations when it comes to the Israeli settlement building campaigns and the suffering of the people of Golan under occupation, which has been one for about half a century.

In addition to the occupation policies of oppression, racial discrimination, arrest, torture and deprivation of natural resources, said al-Jaafari, “Syrian citizens under occupation is denied treatment at the Israeli hospitals if they refuse to carry the Israeli identity…nor they can study at schools speaking Arabic”.

The occupation authorities, he added, prohibit the Syrian Red Crescent from working in the occupied Golan, as they also ban the building of medical centers or hospitals in violation of the 1911 resolutions of International Red Cross and Red Crescent Movement.

He also referred to Israel’s building of an apartheid wall to the east of the Syrian city of Majdal Sham and rejecting to hand to international organizations the maps of mine fields, which have killed over 726 Syrians, including 227 children.

Al-Jaafari made a particular reference to the support which Israel has been providing the armed terrorist groups, including those linked to al-Qaeda, at the disengagement zone in the occupied Syrian Golan, dismissing that as a blatant violation of the Agreement on Disengagement signed in 1974 and the mandate of the UN Disengagement Observer Force (UNDOF).

The occupation authorities, he said, went too far with this support to even building a field hospital near the separation line in the Golan, with Israeli Prime Minister visiting the injured terrorists being treated at Israeli hospitals.

Al-Jaafari warned that the Israeli support to the terrorists endangers the life of the UN troops operating at the disengagement zone, and it did actually do that when terrorist groups have repeatedly kidnapped or shot UNDOF peacekeepers.

Israel, the Syrian Representative said, has not stopped at providing logistic support, but went on to directly interfering in Syria militarily more than once, including recently the bombardment of a school and a mosque in al-Hamidiyeh village in the Golan near the separation line.

He highlighted that a clear alliance exists between Israel and Saudi Arabia, Qatar and Turkey, whose core is providing support to the terrorist groups in Syria, including al-Qaeda affiliates, and push them forward to destroy Syria, kill its people and abort the establishment of the independent Palestinian state.

“How after all of that could Israel talk about peace?…How a demand for peace is possible with all those practices which undermine the basic principles of peace,” al-Jaafari wondered.

In another context, Syria’s UN Representative warned against the danger of Israel continuing to turn its back on all the calls for establishing a nuclear weapons-free zone in the Middle East and go ahead with developing its nuclear capabilities far from any international supervision.

Al-Jaafari was speaking during the third session of the Preparatory Committee for the 2014 Review Conference of the Treaty on the Non-Proliferation of Nuclear Weapons(NPT).

He said this approach of Israel constitutes a breach of the credibility of the system of non-proliferation of nuclear weapons and jeopardizes the security and stability of the countries and peoples of the region.

“Syria was one of the first countries in the Middle East region to sign the NPT in 1968,” al-Jaafari stressed, adding that Syria was a forerunner in calling for a nuclear weapons-free Middle East when it submitted a draft resolution to the Security Council on December 29, 2003 to this effect.

He demanded that Israel be pressured to join the NPT and subject its nuclear facilities and activities to the safeguards of the International Atomic Energy Agency (IAEA)based on the Security Council’s resolution no. 487 for 1981 and the IAEA’s decision no. 17 for 2009.

He lashed out at Israel for thwarting the holding of the 2012Helsinki conference on making the Middle East a zone-free of nuclear and mass-destruction weapons, calling of setting a new date to hold the conference during 2014.

While, reiterating the right of the NPT member states to utilize the nuclear energy for peaceful use, al-Jaafari, criticized the UN Security Council and the IAEA for not condemning the Israeli aggression on Deir Ezzor site in Syria in 2007, responding to a claim that the site was a nuclear reactor.