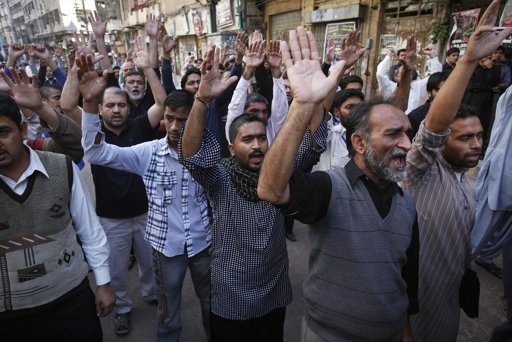 Protest rallies and demonstrations were held in Karachi, Islamabad, Lahore, Quetta and other small and big cities.

The supporters of the MWM thronged Mehfil-e-Shah-e-Khorasan and marched to Imam Bargah Ali Reza (AS) via Numaish and M A Jinnah Road. They were carrying banners and placards. They were raising slogans against the United States, Zionist regime of Israel and their local agents for terrorism in all over Pakistan.

“We always condemned terrorism all in its forms. We exposed the terrorists but government turned a deaf ear to our hue and cry and now you see security agencies too fall victims to the same terrorists,” said Maulana Sadiq Raza Taqvi, MWM Karachi secretary general.

Speaking to the protestors, he said, a local takfiri group who declare Muslims as non-Muslims because of sectarian differences was involved in the massacre of innocent Muslims including Shiites and the takfiri group publicly claims responsibility for the massacre of innocent people. He said that unfortunately, government and security agencies took no action against the terrorists.

Agha Mubashir Hassan said that the outlawed terrorist groups rule Pakistan and they have always challenged the writ of the government.

“MWM condemns massacre of Sunni and Shia Muslims on Alamdar Road Quetta. We express our profound condolence and sympathy with the bereaved families and heirs of the martyrs of the carnage,” he said.

Karachi-based Shia Muslims stage sit-in at five points in Karachi on Saturday to express solidarity with the martyrs of Quetta and those who are staging sit-in against massacre of Alamdar Road.

“Our sit-in will be continued till our legitimate demands are met,” vowed Maulana Sadiq Raza Taqvi, secretary general of Majlis-e-Wahdat-e-Muslimeen Karachi chapter speaking at the main sit-in around Numaish Chowrangi M A Jinnah Road on Saturday night. He said the protestors demand dismissal of Balochistan government and army control over Balochistan mainly Quetta.

He said that a countrywide protest began on Saturday on an appeal of MWM’s chief Allama Raja Nasir Abbas Jafri who asked all Shiites to come out of houses and lodge protest against the genocide of Shiites in Quetta.

MWM Chief Allama Raja Nasir Abbas Jafri also spoke Karachi’s sitters-in and thanked them for their all out support to his call for sits-in and rallies to mark solidarity with the protestors of Quetta Alamdar Road.

It is relevant to add here that Shia Ulema Council too has joined the sit-in and they led the protest at national highway where Maulana Nazir Abbas Taqvi and Maulana Jafar Subhani spoke. At other places, MWM led the sits-in. However, all Shiites irrespective of their organizational affiliations participated in the protest.

The protestors at these sits-in were raising slogans of Labbaik Ya Hussain (AS) and Labbaik Ya Mahdi (AS). They condemned the Shia genocide in all over Pakistan and also denounced the Balochistan government for their failure to protect Shiites’ lives.

“It is unfair that the judiciary take immediate suo motu notice of one Shahzaib and turn a deaf ear to the calls for taking notice of those hundreds of Shahzaib who have been massacred in Quetta, said senior scholar and MWM’s central leader Allama Shaikh Hassan Salahuddin speaking at the sit-in.

They condemned the pogrom of Shia Pakistanis and demanded of all the relevant quarters to play their positive and effective role to stop pogrom of Shiites in Pakistan. They condemned the callousness of the relevant institutions and individuals for ignoring the countrywide peaceful protest of Pakistani Shiites. They also condemned the focus of Pakistan’s polity on long march instead of sit-in of the oppressed and bereaved Shiites who mourn the Alamdar Road massacre in which around 85 people were martyred.