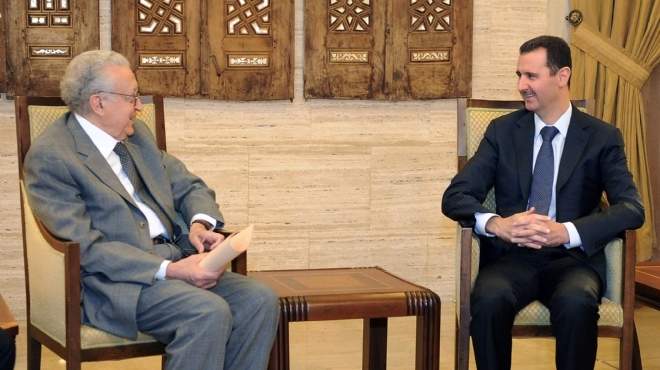 In Syria: A New Hope of Political Solution

The latest developments in Syria, in both the political and military fields, have sparked speculations about the future of the situation there. The Western-backed media outlets intensified their campaign to mislead the public about the accurate ongoing situation in battlefield. They went as far as to replay the old scenario of putting definite dates for what they call “the regime collapse”.

Assad, Brahimi The first shock Assad’s opponents received was the outcome of Lakhdar Brahimi recent talks with the Syrian president; though Assad has expressed willingness to reopen the dialogue and discussion over the constitution and its articles, the formation of a new expanded government, however, he categorically refused to discuss his presidential term, to step down, or to accept any conditions dictated by any party about the structure of the army and the intelligence apparatuses.

The echoes of Assad’s strong stances were heard again in Moscow after the meeting that took place between Russian Foreign Minster Sergei lavrov and Brahimi during the weekend. Lavrov was very transparent and outspoken in translating Assad’s position. He urged the Syrian military opposition to drop down its aspirations to oust President Assad; or to inflict a substantial defeat to the Syrian government and its military forces. Moreover, he urged opposition leaders to accept to set down to a negotiation table, and start serious talks without attempting to put conditions that would definitely lead to sabotaging the efforts to reach a political solution. For its part, Moscow reiterated the same positions it has been declaring since the very beginning of the crisis eruption:

– Russia staunchly opposes any military action or intervention by the Western powers in the Syrian crisis.Russia, US

– Russia refuses all calls and attempts to issue a Security Council resolution against the Syrian government and asserts readiness to use the veto power against it.

– Russia considers Geneva understanding with the Americans the starting point and the basis for any future solution in Syria; this understanding does not include any item about the Syrian president term, contrary to what some Western and Syrian opposition sources have been circulating

– Meanwhile, on the ground, the Syrian government forces have been able to achieve new military breakthroughs. In different provinces in Syria, especially in Homs, and around in the areas the capital Damascus, they inflicted heavy losses on the militant groups.

All estimations do not mirror any possibility for the military opposition to make strategic gains against the government forces, this would put the whole confrontations in a war of attrition mode, which does not give a decisive capability for either parties to make an easy victory. Now , all the parties concerned have a new date to wait, and that is the mid of next month to see what will come out of the new American-Russian talks that will take place in Geneva. Analysts and observers are anticipating tangible results as the military groups may have reached a conclusion their war is not going to lead them anywhere, and as the Syrian leadership is showing more flexibility to help finding a political solution.