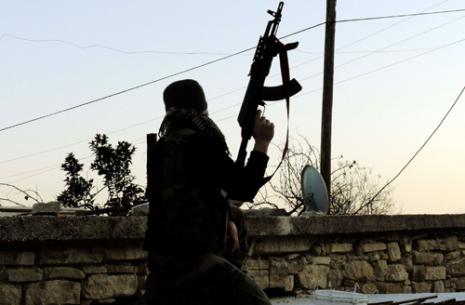 The Huffington post –
Ali Hashem (Chief Correspondent, Almayadeen news network):
Thirty years ago, a famous Syrian author, Mohammed Al Maghout, wrote a film titled The Borders. The film portrayed a taxi driver, who was stuck in the middle of his war torn nation without a passport; the dilemma prompted him to build a coffee shop right on the borders, and bring together rival soldiers to daily parties to help them overcome their differences.

It’s clear today that Al Maghout foresaw the future, and his movie became a reality, with one missing element, the coffee shop that brought together warring brothers to a round table.
Syria and Syrians are not themselves anymore, the peaceful country that I used to visit at any time, and rove its streets and café’s till dawn, is a country of ghosts, where people fear everything.

Death became very cheap. Several were killed while queuing for bread, others while on their way to work, or on the road to school, without mentioning those who lost their lives in anti-regime demonstrations, or for being pro-regime inside an opposition dominated neighborhood.

I’ve been to Damascus several times before the crisis; Syrians seemed to be peaceful despite the fact they’ve been under such a regime for 40 years.

Streets of the city were full of life, maybe a thick layer of life that veiled a bitter reality which none of the Syrians wanted to concede.

They used to smile, always smile, as if they were living the best life ever; they even expressed their sorrow to what neighboring countries like Lebanon and Iraq were passing through, as if they were immune.

Sectarian strife was never an issue that was discussed publicly, though a minority, the Alawites, was ruling the majority, the Sunnis. It’s was all a big black lie, a real lie, and all 23 million Syrians mastered the game, and made us all believe that they are different, but not anymore.

The Syrian crisis widened the sectarian strife along the region, Shiites and Sunnis are no longer covering up their feelings towards each other. They’re blatantly attacking each other’s beliefs, ignoring all common factors that brought them together for decades.

The scene is another copy of the Islamic medieval wars; Muslims are killing each other in the 21st century, for differences inherited from Islam’s early ages.

Another year is starting now, it’s almost two years since the Syrian revolution started; none of the warring parties seem to be able to declare victory. Both the regime and the rebels depend more on external factors rather than internal support. Russia, China, and Iran, back the regime, while the U.S., Europe, and Gulf States support the revolution, it is as if Syria is now a playground for a new cold war similar to that of the ’60s.

Super and regional powers provide money and weapons, while Syrians alongside with sympathizers from around the Islamic world fight each other; they die, and pay the price.

It was a bloody year in Syria. It was even worse than that… Forty thousand at least were killed, much of them civilians, and many children. Those were people with dreams and ambitions, kids who thought one day they will get older and become doctors and lawyers to help and defend the oppressed, women and men, and even elderly who lived till this moment to retire and finally rest.

They all got a rest, a rest in peace, I’m not even sure they are resting in peace, with all the chaos surrounding them.