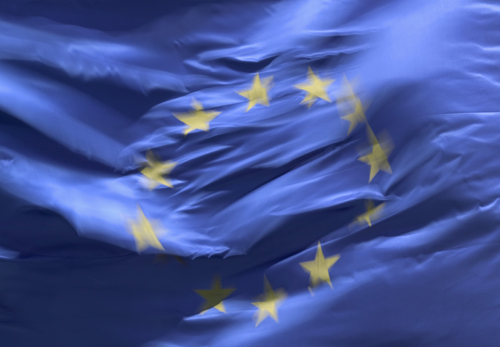 Shutdown for the EU?

Deutsche Welle:
The unimaginable became reality when a splinter group of reactionary politicians, the Tea Party Movement, plunged superpower United States into a crisis over a budget dispute. Only with utmost difficulty was President Obama able to end the shutdown and avert the US’ looming insolvency. ‘The US is far away, this could never happen to us,’ many Europeans might have thought. But those assumptions are probably wrong. In the European Parliament such blockade politics may be just the tactic reactionary forces need to stir things up.
Should EU and euro-hostile right-wing populist parties continue to garner momentum – even winning votes in the May 2014 European elections – these groups would gain influence in the European Parliament. There, they could form alliances and influence EU policy in their own favor. In Brussels the assumption isn’t that the EU could become completely lame, but fears are growing in the light of a potential shutdown threat. Such a move would block legislative initiatives and obstruct parliamentary work. European representative Franziska Keller from Germany’s Green Party spoke with DW regarding current reactionary groups in parliament. ‘We could soon be facing the blockage of a lot more legislative initiatives and the like,’ she warned.
Alliance of right-wing populists
The right-wing populist camp is mobilizing. French and Dutch EU opponents under Marine Le Pen and Geert Wilders are looking to join forces. On Twitter, Wilders announced a meeting with Le Pen on Nov. 13 to discuss a common European election strategy. Franziska Keller believes that the right-wing populists will target the migration and refugee policies of the EU. ‘It’s going to be tough,’ Keller said. ‘If we consider the consequences of the refugee tragedy from Lampedusa and want to strengthen legal immigration, then we’re going to have to brace ourselves for the fight.’
Beyond Germany, other European politicians are concerned. ‘The rise of populism is the most threatening social and political phenomenon in Europe today,’ Italian Prime Minister Enrico Letta told the New York Times.
‘However, we need to address it,’ Letta said, ‘or else we’ll get the most anti-European European Parliament we’ve ever had after elections in May 2014.’
Electoral victories for anti-Europeans
At least 70 percent of the seats must be occupied by pro-Europeans in order to prevent a ‘nightmare.’ But in nearly all of the EU countries, right-wing, euro-skeptical and anti-European parties are gaining presence. These parties’ key issues – such as immigration, austerity, EU withdrawal or rejection of the Euro – dominated the last elections.
The latest example is the parliamentary election in Austria, which took place at the end of September: Right-wing populists received more than 30 percent of the vote. In the Netherlands, Geert Wilders’ right-wing Party for Freedom is third-strongest in the country. A stronghold in France is also the right-leaning Front National. After the first round of presidential voting, party leader Marine Le Pen took a surprising 18 percent of the vote. In a recent survey conducted by magazine, Le Nouvel Observateur, the Front National was the frontrunner for the European elections. In Greece, however, it is the left-wing party, Syriza, and the Communist Party (KKE) who are campaigning for that country’s exit from the Eurozone and the EU.
Symbolic message
Low voter turnout could facilitate the entry of EU opponents into the EU Parliament. At the last European elections in June 2009, turnout was just over 43 percent. Thus it was much lower than the average 60 to 70 percent, which is common in national parliamentary and presidential elections in the European democracies.
The lower the overall turnout is, the more indifferent voters are, the easier it is for radical forces to gain majorities,’ said Sergey Lagodinsky of the Heinrich-Böll-Foundation in an interview with DW. The general frustration with policy draws voters into becoming ‘prisoners in the camp of populist promises.’
According to German broadcaster ARD, policy strategists in Brussels expect that after the European elections, up to 20 percent of the representatives will want to abolish the European Parliament. This would be more than double the current number. Currently about 60 of the 765 deputies are Euro-skeptics. ‘If there were a relatively strong group within the parliament to work against the parliament and union,’ said Lagodinksy, it would be a message of great symbolic power. ‘I believe this symbolic power would be the worst thing that could happen.’
In the wake of populism
Unlike the Tea Party, a sub-group of the Republican Partv in the US, which has greater influence over US policy, the EU-critics are relatively isolated, according to Sergey Lagodinsky. These critics would not present an institutional threat like the Tea Party.
‘The danger would be, however, that other conservative parties, even left-leaning parties, get involved in the wake of populism.’ Lagodinsky names Germany as an example, ‘where, with the growing importance of the anti-Euro Alternative für Deutschland Party (AFD), as well as the conservative groups – potentially the Free Democratic Party (FDP) – are being pressured and attempt to play with these slogans.’
EU representatives like Franziska Keller of Germany’s Green Party want to use the remaining time until next year’s European elections in May to highlight the importance of voting and to develop a strategy above all else to cut the right-wing populists down to size. ‘Until now the right-wing groups in European Parliament have ultimately broken into pieces over their nationalistic disputes,’ Keller said, adding that she could imagine the same thing happening again. ‘But we cannot rely on it.’