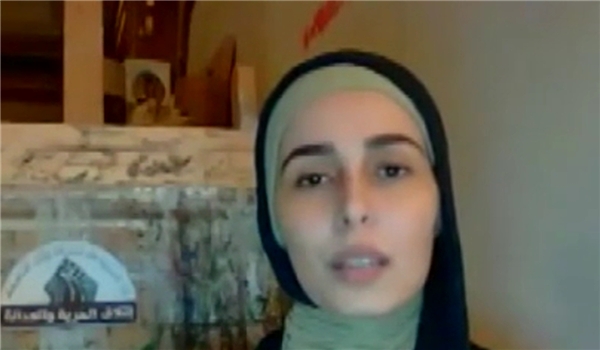 Saudi princess called on people across the kingdom to rise against the ruling regime, as she greeted the martyrs and prisoners in Al Saud jails.

The eldest daughter of King Abdullah, Sahar, who is along her three sisters under house arrest in Jeddah city, released a video message in which she said that victory is theirs.Saudi Princess Sahar

“Greetings to martyrs and to free men in jail. It is an honor for me to learn the meaning of freedom, rights and dignity from you revolutionary people,” the 42-year-old Saudi princess said.

“We promise to follow in your footsteps and not to let go of your hands. God’s hand will be above us. We learn determination from Ayatollah Nimr al-Nimr, the Sheikh of free men,” she said referring to Sheikh Nimr al-Nimr, who was attacked, injured and arrested by regime forces in Qatif region over calls for the release of political prisoners.

“For this reason, we will press ahead on the path by our own will,” she added.

“And we will become victorious with faith in God. Good luck, you who have honored us by raising the flags of freedom. Your sisters, Sahar and Jawahir,” Sahar stated in the message.

Sahar, Maha, Hala and Jawaher Al Saud are daughters of Saudi King Abdullah bin Abdulaziz, who are reportedly being confined against their will.

On April 20, Sahar told the New York Post in a phone call that “We are cut off and isolated and alone.”